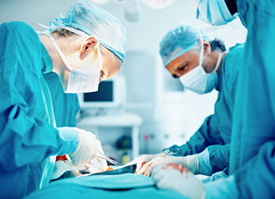 Cauterization is a technique used to close wounds and keep you from losing blood or bleeding out during surgery. The technique involves making incredibly precise burns on body tissue, effectively sealing a wound shut. Electrocauterization is a similar process, but uses electrical energy to generate the required heat.

Electrocautery is performed by running an electrical current through a probe, creating the heat required to burn or “cauterize” the tissue. To protect the patient from accidental contact with the electrical current a pad is applied to the patient's body (often on the thigh) to provide a source of grounding.

The two types of electrocautery are known as “monopolar” and “bipolar.” Monopolar electrocautery is used less frequently as it causes deeper injury and poses an explosion risk in the presence of flammable gases. Versatility in using this technique is achieved by adjusting the heat and movement of the probe.

When Electrocautery Is Used

There are two main functions an electrocautery probe can perform. “Coagulation” is achievable through creating enough heat to fuse tissue together while still keeping it intact. “Cutting” is achieved by increasing the heat enough to split the skin. A process called fulguration is used to “cut off” unwanted tissues like tumors or warts.

Electrocautery risks include an increased risk of transmural necrosis (killing organ tissue), fetal stimulation and bowel explosion. Electrocautery may pose a risk of interfering with devices such as pacemakers.